Our home in Kobe was in a small, peaceful residential area bordered by love hotels and mountainside. On the surface, it was nothing special, just another cluster of homes with just a sprinkling of tiny shops here and there. Beneath the facade, there was a sense of uneasiness – tension, even – as if something very, very bad happened there long ago. This was a neighborhood characterized by voyeurism and paranoia; I never felt alone there, but I knew I was being watched and kept at a distance.

Let’s take a quick tour of the neighborhood, starting with: 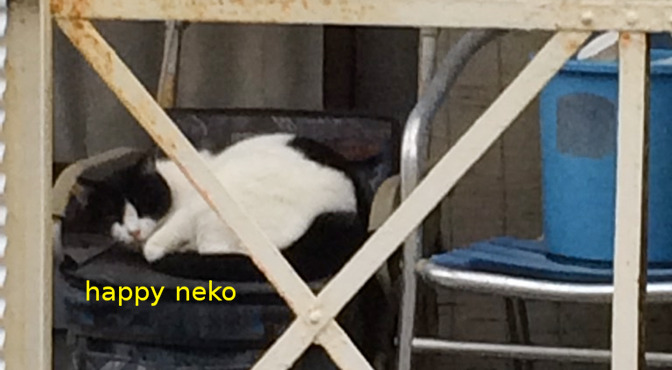 We paid a lot of rent and key money to live in this neighborhood, but make no mistake, the stray cats owned the place. There were at least five main characters in the gang, and all were wary of their human neighbors, who took to putting out water bottles* and plastic spike strips in a vain attempt to thwart any feline activities. Though the cats were generally harmless, every once in a while we were treated to fecal landmines or urine stench. The real problem was the nekobentos, kitty lunches, placed mere steps away from our front door on a daily basis by our archnemesis, Nekobaba.

*There is a somewhat superstitious belief (primarily among old people) that cats are intensely frightened by water contained in large, clear plastic bottles. If you ever notice stacks of water bottles fenced around homes in Japan, their purpose is to repel cats. 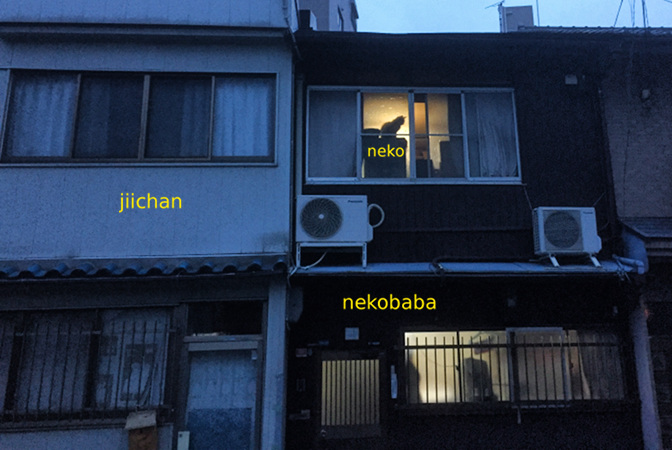 I imagine the cover of Nekobaba’s autobiography would definitely be a photorealist illustration of herself wielding a scepter, flanked by lions and tigers, hair and silken robes all flowing in the wind. But in reality, Nekobaba was the scourge of the neighborhood. When the nekobentos eventually became a serious cockroach attracting, garbage-blown-into-our-entryway problem, my brother-in-law went over to her house and had a few words. Her response was that the cats had been living in the neighborhood longer than we had. She wasn’t wrong, but damn!

I never actually met Electric Man and his family, but my wife did. Their house was covered in ham radio antennas, and the rear of the house was a dilapidated mess of rusty, corrugated metal patchwork. They were, however, among the handful of good neighbors on the block.

I’ll be honest, I didn’t mind Security Man so much. If it wasn’t for the one of six security cameras rigged up behind his house that was angled suspiciously toward to our balcony window, I would have been totally fine with the idea of utterly complete video coverage around our little alley corner. Still, it was a bit disconcerting rounding the corner at night knowing there was probably some weirdo sat in a dingy recliner, staring at my image cascading across a wall of screens. I really do wonder where his paranoia originated from, because his wasn’t the only place on the block covered in cameras. No, we had some very paranoid neighbors who were at least as concerned about video coverage as Security Man.

The Nationalists and the Yakuza

In Japan, there is a movement called Uyoku dantai, which I won’t explain here in too much detail. Suffice it to say, if you see a convoy of vans and buses painted up in Japanese livery spouting nationalist propaganda from their loudspeakers, you have witnessed the Uyoku dantai. For as loud as they are, these right wing nationalists are somewhat rare. We were lucky enough to have what appeared to be a headquarters on our block with one of those big buses parked outside. Next door was a newly built home painted in a cheerful shade of prison-gray, with a large Japanese flag hanging from the second floor (flying the national flag at one’s private residence isn’t exactly socially acceptable in Japan the way it is in ‘Murica and elsewhere abroad). As it turned out, this was a somewhat infamous Yakuza headquarters. Yep. Like Security Man’s house, both of these buildings were bathed in security camera coverage.

We didn’t know much about Jiichan, but Jiichan probably knew a lot about us. He had a near perfect view of our comings and goings from his second floor bedroom window and would stand between the curtains for hours, an unmoving silhouette against dim, incandescent bedroom light. Creepy as hell, but not nearly as creepy as…

Face Man was my favorite and arguably the freakiest addition to the block. Whereas freakiness is traditionally correlated with how late in the night one comes out of hiding, Face Man only appeared early in the morning. I had noticed the unusual appearance of his first floor window screen before – a large area right in the middle of it had somehow become badly oxidized over the years. The first time I walked by and actually saw the motionless face breathing into the screen I nearly soiled myself. Face Man, unflinching, continued to stare out into the aether. That was not the last time I saw him, but it was the last time I intentionally took that path to and from our apartment before 9am.

Despite the unusual characters surrounding it, our apartment was amazing. It was clean and new, with a glimpse of mountainside from the balcony. We had both floors and only one shared wall! Around the block there was also an okonomiyaki shop, a koban (a small police susbstation), a small park, and, believe it or not, an onsen with fresh mountain spring water available out front on tap. Across the main road, there was a fantastic ramen shop serving the best fried rice I’ve ever tasted.

Moreover, Kobe is such a lovely, interesting city with so much to offer, and I miss it a great deal. We’re now in Osaka, which is an enormous metropolitan area with an order of magnitude more going on than Kobe. Yet Kobe will always have a special place in my heart.

See you soon, Kobe. Probably next weekend, ’cause I want Nokisaki Tacos.

View all posts by Jack